This week we are highlighting Dr. John Detre, our go-to neurologist for all things MRI. Currently Dr. Detre is focused on researching how cerebral blood flow and metabolism operate under normal conditions and in response to brain injury using functional imaging techniques and spectroscopy. He is also known to occasionally make an appearance as the inpatient stroke attending, offering both a unique perspective and a whole lot of humor to stroke rounds. 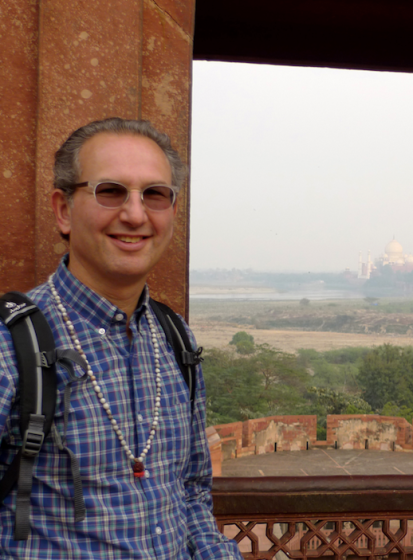 I’m of Hungarian Jewish descent (when you have Hungarians for friends, you don’t need enemies) and both my parents were Holocaust survivors.  I grew up in New Haven, but completed high school in Pittsburgh after my father got a position there.  I went into the “family business” of academic medicine after getting interested in brain research in college. My wife Wendy Beetlestone and I moved to Philly in 1988, shortly after getting married because Wendy landed a job as a TV news producer at Channel 10 here, though now she is a Federal Judge. We have two adult-ish daughters and a poodle.

What specialty are you in. Why do you love your field?

I worked in a neurochemistry lab in college, but wanted to study the brain less invasively than homogenizing it and running out proteins on polyacrylamide gels.  In med school I heard a talk on in vivo NMR and immediately knew I wanted to do that.  I was lucky to be involved in NMR imaging (MRI) of the brain in the early days of trying to image brain function, and neuroimaging has turned out to be a fun and rewarding field that combines physics, engineering, computer science, physiology, and medicine.  After med school I completed internship and then did two research fellowships in NMR imaging, focusing on methods for noninvasive quantification of cerebral blood flow.  When we moved to Philly I decided to finish residency and chose Neurology because the training was two years shorter than Neuroradiology.  Neurology turned out to be a great choice because tolerance for scholarship is higher than in most other fields of medicine.  My clinical focus is on stroke and migraine, both of which involve disorders of cerebral blood flow. With the explosion of neuroimaging applications over the past 20 years, I have also become involved in studying epilepsy, TBI, neurodegeneration, addiction, and normal brain physiology and function.  I love being able to collaborate widely and work in multiple fields, though I’m not sure it’s the most efficient pathway to success.

Tell us some of your favorite places in Philadelphia

I live in the Wissahickon Valley section of Fairmount Park, which is one of the most scenic areas, and about as nice as anywhere you can drive to in a couple hours.  The sound quality is excellent at Union Transfer.  The best music event of the year is the 3-day non-Commercial radio convention (non-Comm) every May at the World Café venues attached to WXPN. I like the avant garde production style at the Wilma theater, as well as productions by Pig Iron and the Bearded Ladies.  Favorite restaurants are TNTC, but include Serpico, Townsend, Cheu and Bing Bing, Vietnam Café, Vetri Pizza, and John’s roast pork.  Penn campus is pretty nice too.

What landmark papers or resources in your field should we all know and love?

It’s disappointing that we don’t do arterial spin labeled perfusion MRI more routinely since it was invented at Penn and can address a lot of uncertainties in cerebrovascular management.  It’s one of the only MRI contrast mechanisms whose physiological basis is actually known.  But “BOLD” is a much better acronym than “ASL” (which sounds a bit like “a**hole”), and the images are cooler.  I particularly like this video even though it didn’t really teach me anything, though I’m a sucker for a British accent.

What advice do you have for residents?

My intuition is that people choose Neurology because they are motivated more by intellectual challenge than by financial reward, and they are also probably either comfortable with or even attracted by diagnostic and therapeutic uncertainty.  If you wanted something more concrete, you could have picked cardiology – basically only four things can go wrong with the heart. So, as you are doing your clinical training, keep note of the uncertainties you find most interesting and use that to motivate your learning and career direction, whether it is research, education, or clinical care.  Also, think about the lifestyle you want after training because it’s highly variable across the spectrum from research to clinical and clinical areas.  And, when you negotiate for your first job, don’t forget about parking since a good parking place is one of the keys to happiness and fulfillment.